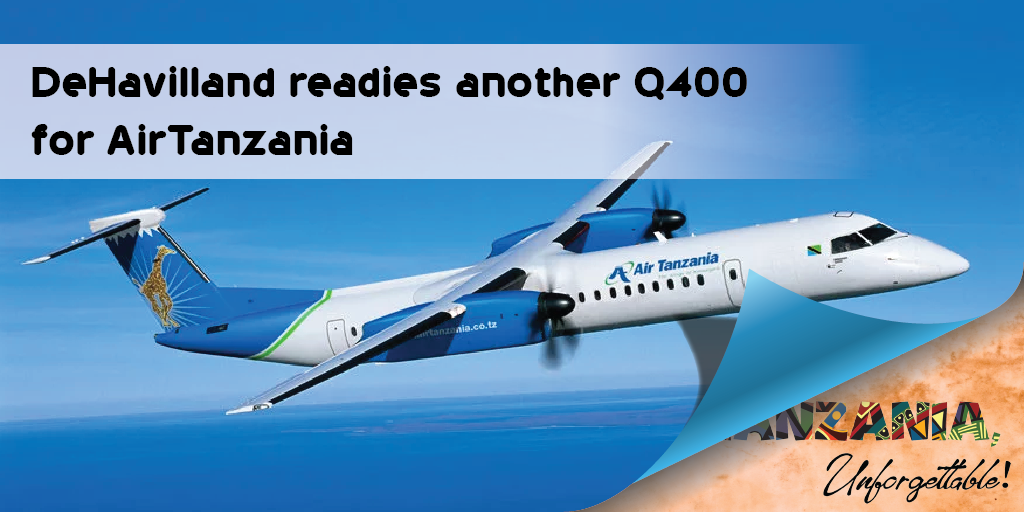 FOURTH Q400 DUE FOR DELIVERY AT THE END OF NOVEMBER

When all aircraft on order by the Tanzanian government and to be seconded to Air Tanzania have been delivered, will the cost, going by current list prices, come close to a billion US Dollars. The fleet will by then have grown to 10 newly purchased aircraft, plus two ageing planes formerly part of the presidential fleet.

According to list prices do the Boeing’s go for approximately 248 million USD a piece, the De Havilland Q400’s at just over 32 million USD a piece and the Airbus A223’s for 91.5 million USD for each aircraft summing up to a whopping 990 million US Dollars for the aircraft and an added bundle for spares and training.

The airline was in addition handed two ageing aircraft from the presidential flight unit earlier this year – one Fokker 50 and one Fokker 28 – to operate as part of the airline’s fleet but it does not seem these two planes are presently undertaking any commercial flights.

Meanwhile has Air Tanzania used their fleet of new aircraft to expand their route network and with former rival Fastjet out of the picture and out of the Tanzanian skies, they have only to contend with Precision Air – and airlines operating smaller aircraft like Coastal Aviation and Auric Air.

Subsequently has their share of passengers uplifted grown massively since the new aircraft have started to arrive, adding much needed revenue to meet the Tanzanian president’s demands that the airline must turn profit, or else.